Cutback bitumen consist of bitumen that has been diluted in solvent (cutter or flux) to make it more fluid for application. The fluidity of cutback bitumen depends on the degree of hardness of the bitumen and the proportion of diluent.

Cutbacks are classified according to the time it takes for them to cure, or become solid due to the evaporation of the diluent. Classifications are rapid curing (RC), medium curing (MC) or slow curing (SC). A cutback varies in behavior according to the type of cutter or flux used as the diluent with white spirit commonly used for RC grades, kerosene for MC and diesel for SC. A rapid-curing (RC) solvent will evaporate more quickly than a medium-curing (MC) solvent, which in turn will cure more rapidly than a slow-curing (SC) solvent.

The viscosity of the cutback bitumen is determined by the proportion of solvent added – the higher the proportion of solvent, the lower the viscosity of the cutback. “. When the solvent has evaporated, the binder reverts to the original penetration grade. The advantage of cutback bitumen is that they can be applied at lower temperatures than penetration grades because of their lower viscosities.

Among Cutback tests, the important of them is kinematic viscoustity and distillation test. Also there is a general requirement in the specification that cutback bitumens should be free of visible water, and will not foam when heated to application temperature. Flash point, a measure of the temperature to which a cutback bitumen can safely be heated under certain conditions, is usually monitored at the point of manufacture since certain precautions are necessary during transportation and application of the product. 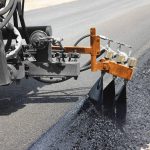