The increasing number of automobiles across the globe is driving the demand for lubricants. Producing base oil from crude oil is an energy-intensive process. A refinery needs to process 100 gallons of crude oil in order to produce one gallon of base oil. On the other hand, only 1.4 gallons of used oil is sufficient to manufacture one gallon of base oil. Petrochemical sources are depleting and increasing prices of crude oil are encouraging oil manufacturers to find new methods to re-refine and utilize waste oil. This makes recycling of used oil a fairly viable process for base oil manufacturing.

The waste oil collected from engines, which has toxic and hazardous to the environment if disposed of in open spaces.  And also, the limited availability of feedstock required for the manufacture of virgin oil is driving the need for use of recycled base oil.

The used oil is the feed of Recycled base oil unit plants, this Product is eco-friendly and it generates lower carbon emissions than virgin base oil. The rise in the focus on sustainability of the environment across the globe is providing a significant opportunity to the global recycled base oil market. Thus, environment protection bodies across the globe have formulated strict regulations to control the disposal of used oil.

b. Used Engine Oil (After Centrifugation)

i. Recycled Base Oil (Ravenol Type)

For more information on the grades and specifications, please do not hesitate to contact us

Types of Recycled Base Oil

Used oil, such as engine lubrication oil, hydraulic fluids, and gear oils used in cars, bikes, or lawnmowers, can be re-refined again and used as a feed of many petroleum industries. Motor oil does not wear out, it just gets dirty, so recycling it saves a valuable resource.

There are many uses for recycled used oil that must be managed properly by local waste management authorities or automotive repair shops to prevent contaminating the environment. Somehow recycling used oil keeps it from polluting soil and water and also less energy is required to produce a gallon of re-refined base stock than a base stock from crude oil.

The term dewatering is usually taken to mean the removal of free water.

2) Filtering & demineralization of the oil

This is an important pre-treatment step in the re-refining process. The aim is to produce de-asphalted lube oil, which becomes a feedstock for the next step in a re-refining facility. The other stream is propane, which is recovered from both streams and re-used within the process

Distillation is the physical separation in which there are 2 types of distillation, atmospheric, and vacuum. Depending on the type of distillation, the boiling ranges can produce gases and gasoline at the lower boiling points with heavy lubricating oils being distilled at higher boiling points. This is the core process for a facility capable of producing re-refined base-oils. 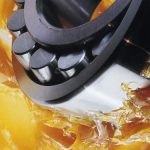 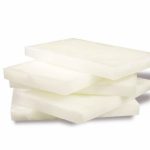