The spot test is useful for detecting overheating or cracked bitumen occurs because the actual molecules are thermally broken apart. It is shown whether or not Bitumen has been damaged during processing due to overheating. The steps of tests are listed below:
1) Dissolving about 2 g of bitumen in 10 ml of Naphtha
2) Placing a small drop of this solution on a filter paper chromatography
3) Checking after one hour
4) Checking again after 24 hours
If the spot of the filter paper is uniform brown, the bitumen is taken to be un-cracked. So the test will pass negative successfully. A negative test result means that there is no additive in the tested bitumen and it is considered pure. In contrast, a positive result, the spot formed is brown with black, which means that the tested bitumen contains some additives. For example, the Spot test on Iraqi bitumen is positive because it contains large amounts of sulfur.
Cracked Bitumen tends to be less ductile and more susceptible to aging effects. Since modern refining practices rarely cause cracking, the spot test is not often specified. 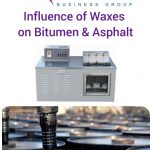