Chlorine and sodium hydroxide (caustic soda) are among the top ten chemicals produced in the world. Caustic soda is a widely used chemical produced by electrolysis of an aqueous NaCl salt solution (brine). The resulting product is caustic soda lye or liquor, a NaOH solution in demineralized water.

Caustic soda has is one of the main constituents in the production of construction material like PVC, epoxy resins, polycarbonate, and also used as a strong chemical base in industries like pulp and paper, textiles, drinking water, soaps, and detergents, water treatment. However, for PVC in the construction industry has been experiencing huge growth in the past five years. Caustic soda is widely used in the alumina industry. Owing to the increasing use of aluminum in the transportation sector. The automotive makers are increasingly using aluminum to reduce vehicle weights. Furthermore, the rising use of aluminum in the automotive and transportation sector along with rising vehicle production and sales is estimated to propel the growth of the market. Moreover, increasing pulp demand in paper industries coupled with rising caustic soda consumption is estimated to drive the growth of the market.

However, there are some of the major restrictive factors such as fluctuating alumina prices due to economic instability may affect the caustic soda market segment. The global share application of caustic soda has shown as below;

Global caustic soda market demand was 74.57 million tons in 2015 and is expected to reach 99.30 million tons by 2024, growing at a CAGR of 3.2% from 2016 to 2024; the biggest producer & Consumer of caustic soda in the world is China which has demand of 28856 Thousand Ton at 2016 while it was export exported 974 thousand Ton on the mentioned year.  after China; North America with the capacity of production 16233 thousand ton is the second producer and first exporter with capability pf export 2611 Thousand Ton; The global Capacity of production Caustic Soda at 2016; has shown as below: 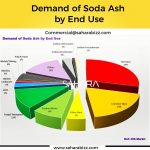